'Variety is the Spice of Life' - The Pan-Catalan bike trip

It struck me descending a pristine, freshly laid strip of jet black asphalt. It twisted, pitched and rolled down a valley bathed in the early evening sun, the dappled light passing through a sea of pines. It softly lit the red soil and was so tranquil the only sound that filled the air was the buzzing of 4 hubs, spinning away.

Ten minutes previously, ten-ish kilometres before, we’d been staring at three eagles soaring over Pyrenean pastures, nearly 2000m above sea level and seen 2 marmottes scuttling across the road. The contrast was stark, it felt like we’d blinked and travelled halfway around the world. But we hadn’t, and the reason why is pretty simple:

Catalonia is the most varied place I’ve ever ridden. Nowhere else comes close, and I’ve been lucky enough to ride all over the world. I had an inkling, having lived in Girona for a year and explored a fair chunk of the surrounding area, but I wanted to set the sights a little further into the heart of this beautiful region to confirm my suspicions. A four day weekend (Big thanks to Queen Elizabeth II), perfect weather and the ideal ride companion. Routes planned, Airbnbs booked, we set out. And this is what we saw.

After setting off from Girona our first stop of note was Besalú. From here, the roads grew quieter and quieter and before long we were on our first climb of the day.

Castellfollit de la Roca to Camprodon is a tough, up-and-down section through the Garrotxa. An area of long-dormant volcanoes that have left a landscape akin to a crumpled up piece of paper, albeit with dark, rich soil, endless basalt walls and a few craters for good measure. 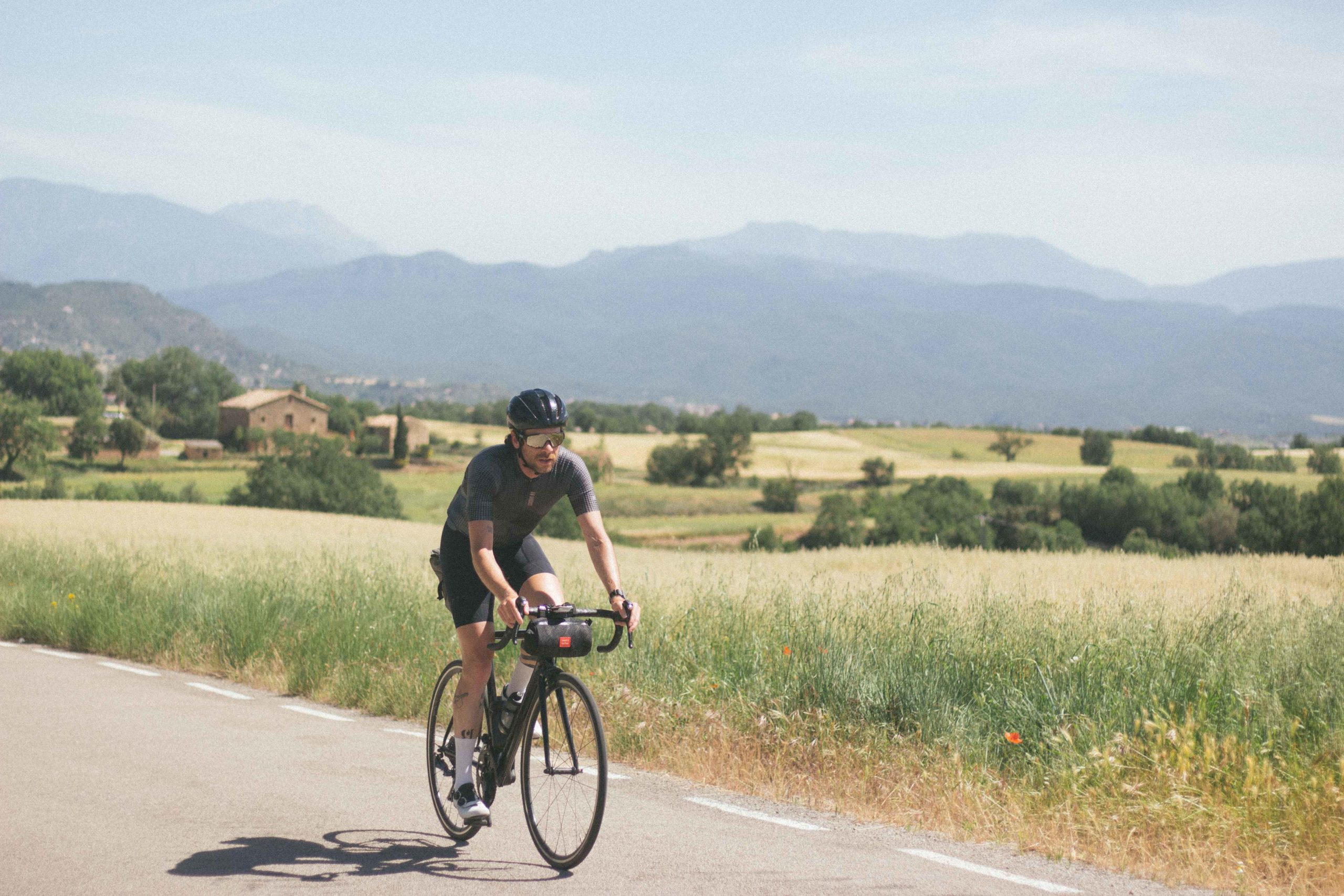 It’s not until you start dropping into Camprodon that you really feel like you’re in the mountains, with the small, numerous valleys turning into wider expanses of alpine pasture. We stop for lunch at Bistro la Parra, with an incredibly friendly host who’s happy to talk bikes, travelling and what exactly makes his Patates Braves different from the rest (proper tomato sauce, and roasting, rather than frying, apparently). Having pounded enough Aquarius and Coca-Cola for a full family of 5 we’re satiated and ready to roll to Ripoll, after which the fun really began.

The Coll de la Creueta technically only refers to the very end of our climbing, after the left turn off the GI-400 onto the BV-4031, but to us, it feels like we’re tackling it from way further out than that. It starts gently, rolling up a valley home to famous mineral water and decaying, old, abandoned spas still showing hints of their early 20th-century opulence. The road starts to increase the gradient, kilometre by kilometre, per cent by per cent. 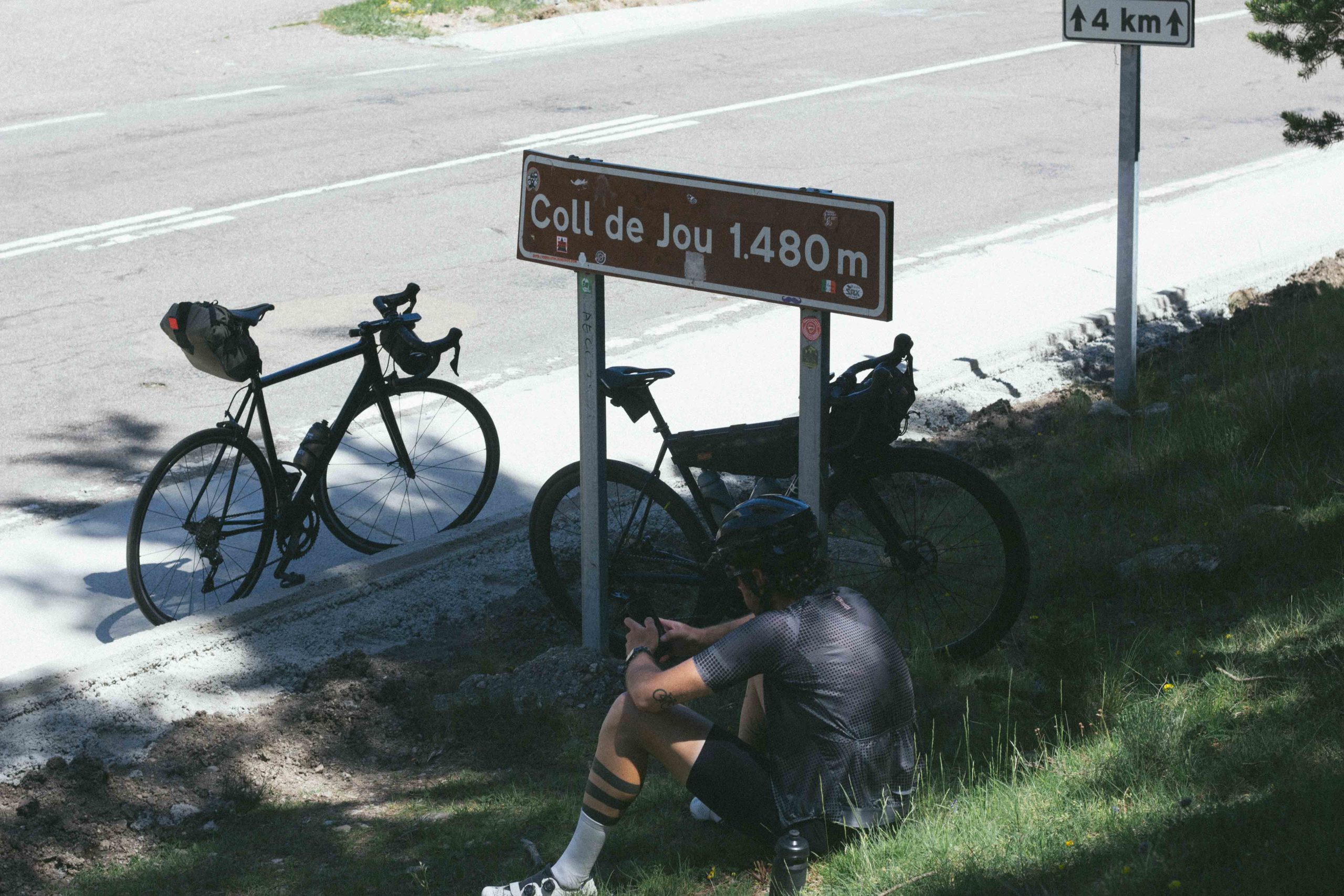 The section that’s officially the Collada de Toses is, at this point of our ride (140km, very hot) quite grim. The slopes are in excess of 10% but without any shade and 6 hours of riding in our legs, it feels like more. We winch our way up, finally greeted by views out into France. It’s getting chilly so we carry on quickly, taking a moment to appreciate an impromptu gathering of vintage tractors, an odd place for a convention, for sure.

The views as you take on the Creueta are worth every moment of struggle beforehand. It’s a vast, empty area of grassland with no vegetation, the imposing Puigmal on the left with a few marmottes and eagles for company. It’s quiet, it’s beautiful and as we crested the top the views back into Catalonia from up on the roof are spectacular in the evening sun. 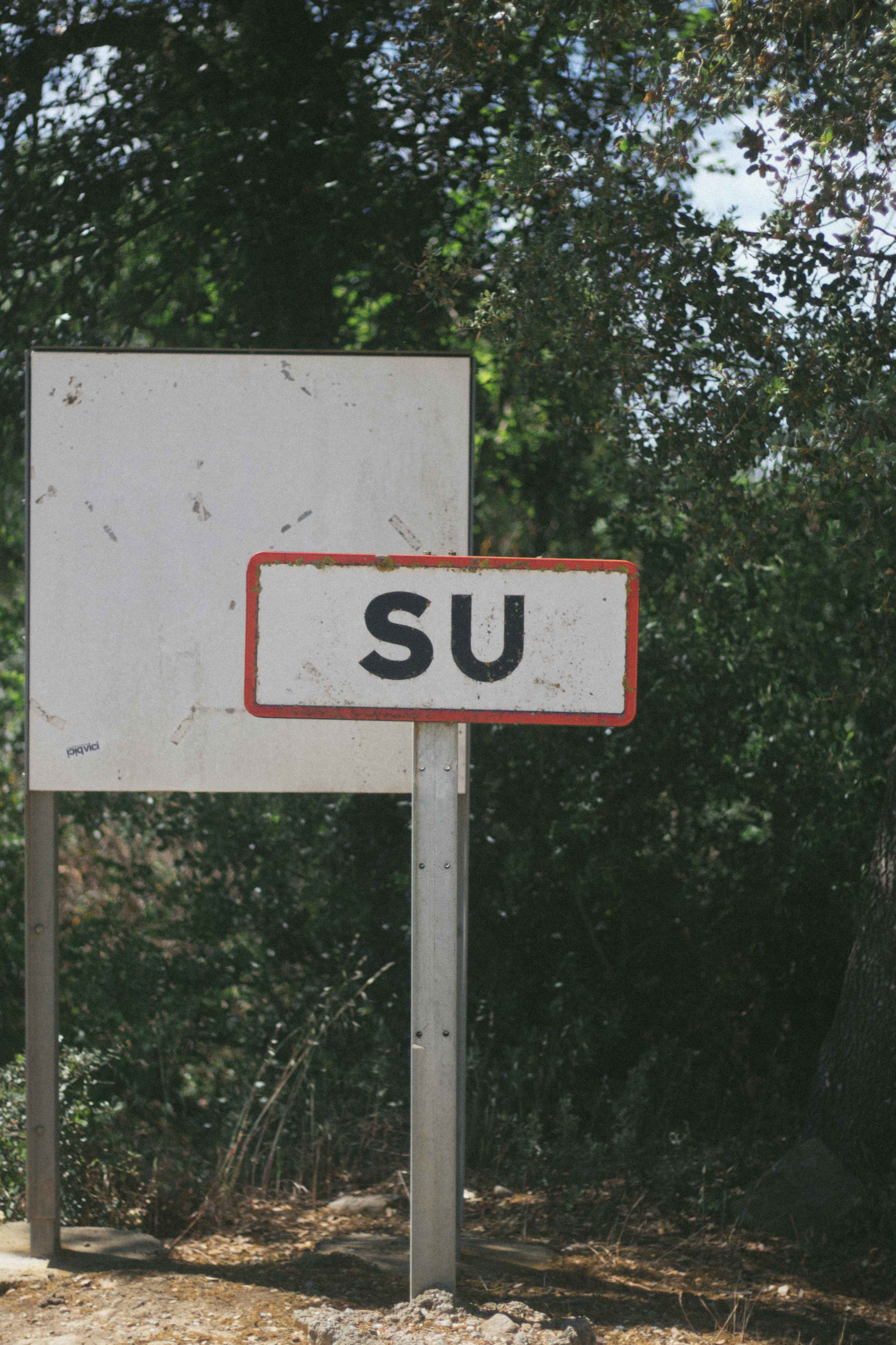 The descent to Castellar de n’Hug is good, the Carrer de Gombrèn a Cal Ros is even better, and if you do this journey it’s not to be missed.

We arrived at our accommodation, a refuge at the top of the Coll de Merolla. It’s usually respite for hikers, or climbers, especially as the owner is one himself. We’re tired but not in bad shape, admiring the walls of memorabilia giving us slight vertigo. This is the end of the hardest day of the trip, from here on the climbs are easier, the distances shorter. We can’t wait to keep going.

We’re awoken by a herd of cows jangling their way down the road, they even look like they’re going to join us for breakfast at one point, which, thankfully they didn’t, as we agree the massive bull wouldn’t be good table company. 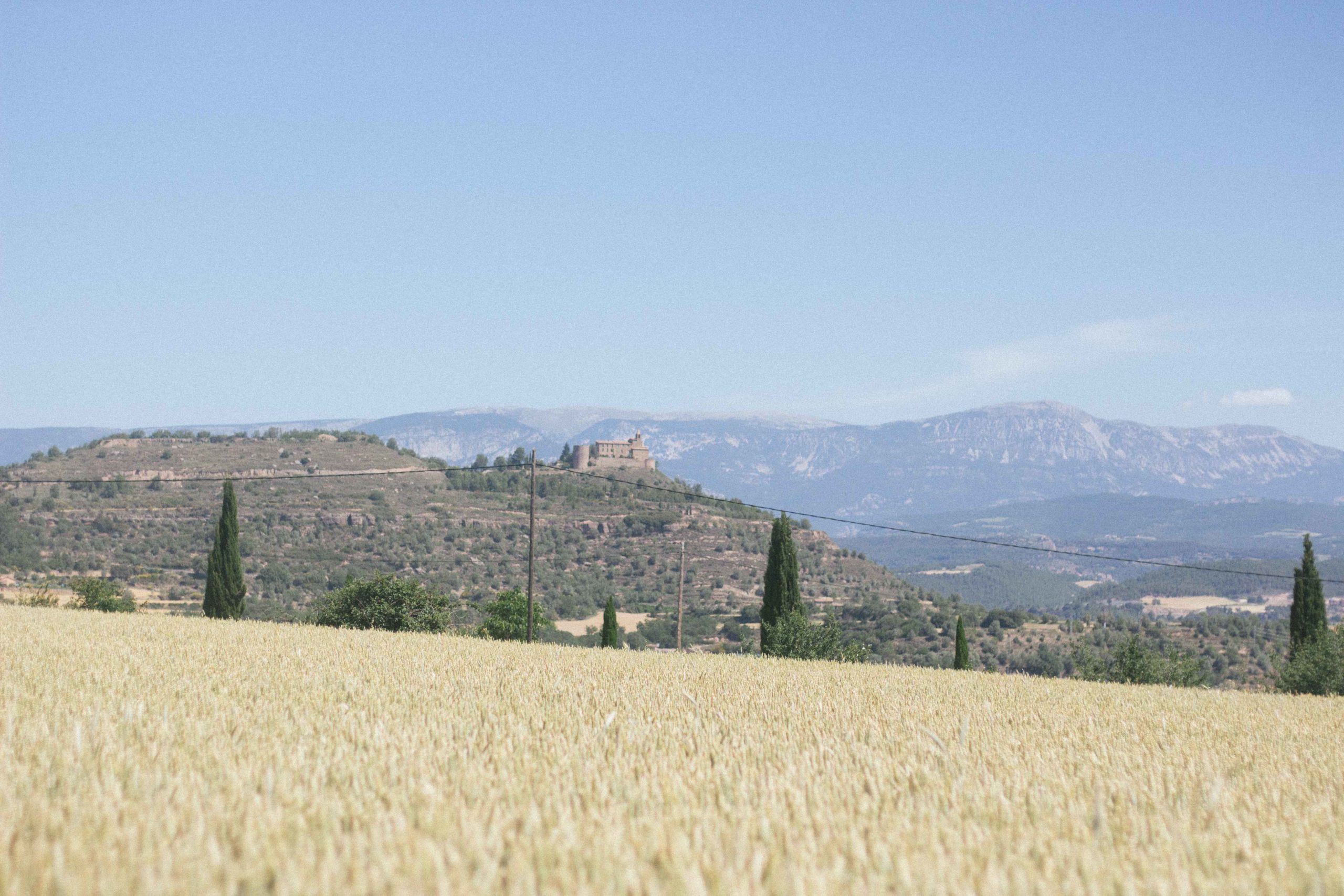 It’s a descent straight out the gates, which we decide to tackle in our easiest gears, spinning furiously to wake the legs up. We aren’t sure if any coach would recommend it, but the massive birds and horses we passed seemed to enjoy it.

A pit stop in Berga for coffee and another serving of our official trip fuel, Bocadillo de Tortilla Francesa. After this, it’s onwards and upwards along lovely twisting roads beneath the base of dramatic cliffs. The riding today already feels different, with no steep slopes. No high mountains but amazing gorges, cliffs and valleys. It feels like we’ve moved into a different world altogether, only emphasised as we take on a rapid descent towards Sant Llorenç de Morunys and its strikingly teal lake.

One more round of bocadillos with an omelette, cheese and tomato later (and the finest ones we had, for that matter) at El Jardí and we were climbing again, this time a sharp 6km test in the baking afternoon sun. Three things keep us going: the thought that this was the final hill of the day, the frankly outrageous views of jagged rock faces back down the valley, and the tantalising prospect of the world’s most scenic churro stall at the top. The first two aspects did not disappoint, but when I arrived at the top some time after Gui all I could see was his crestfallen face under the shade of a pine tree. The churro stand was closed, we were a day early. Heartbreak hotel. 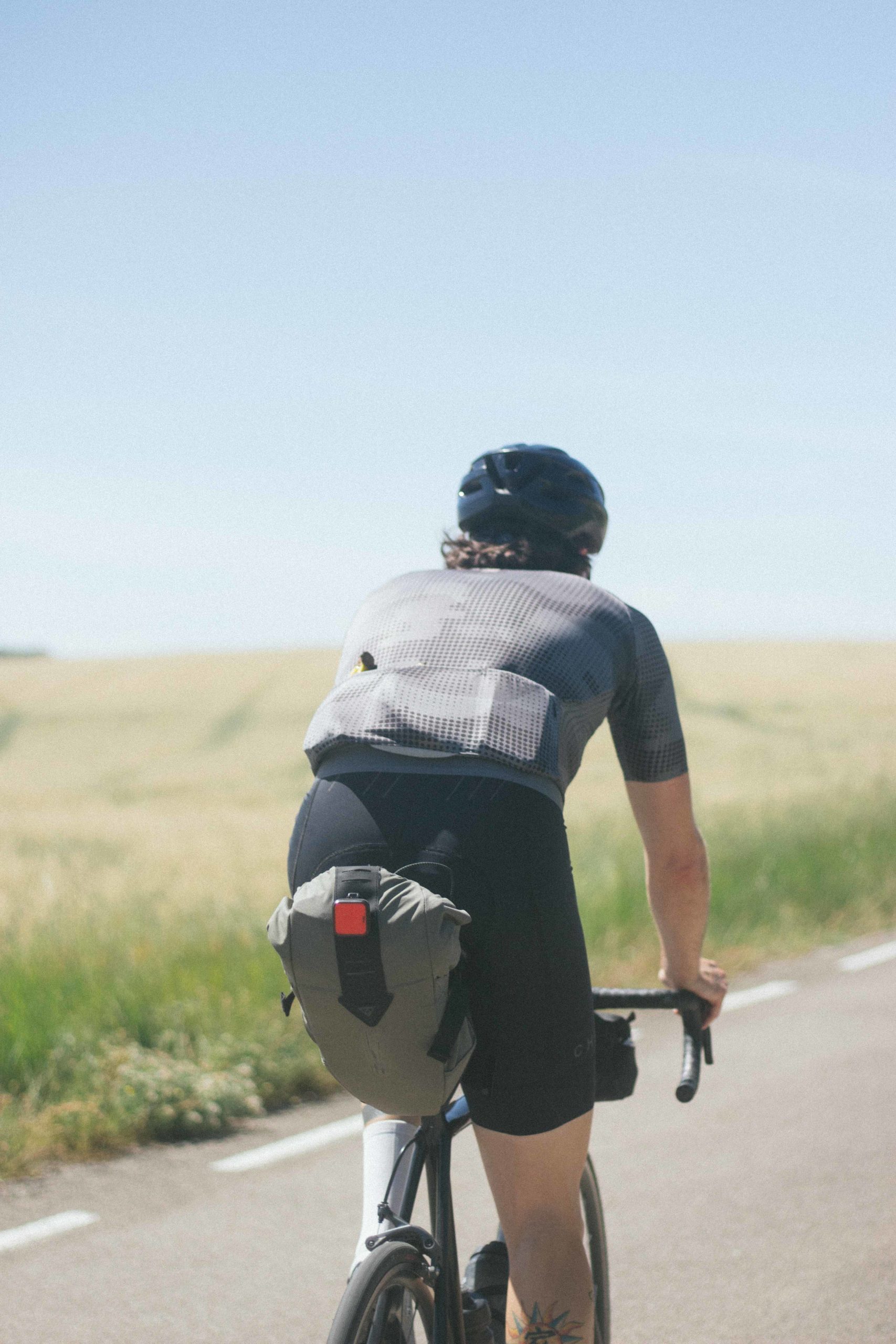 The downhill into our stop for the night at Solsona was yet another pristine piece of tarmac, with canyons off to the right that looked like they’d come straight out of the badlands of Mexico. A dead straight road delivered us from the mountains to the rolling foothills and again we’d changed the scene, to something more pastoral with open fields, bright yellow corn and hilltop villages.

Solsona meant another beautiful old town, filled with bars that were fit to burst on a Friday night. We dropped in at Casa Adroguer Nou for their house vermouth, fresh sardines and anchovies that we’ll pretend replenished the salts we’d lost throughout the day. It’s a classic joint decorated with a tiled exterior and library-like interior, except bottles of wine replaced the books. Then it was onto El Punxó for pinxos in the square, soaking in the buzzing atmosphere with the locals.

The next morning started like the two before, with a slow pace and a late start. A good thing, given the sore heads from the night before. Never has so long been taken to savour an orange juice. 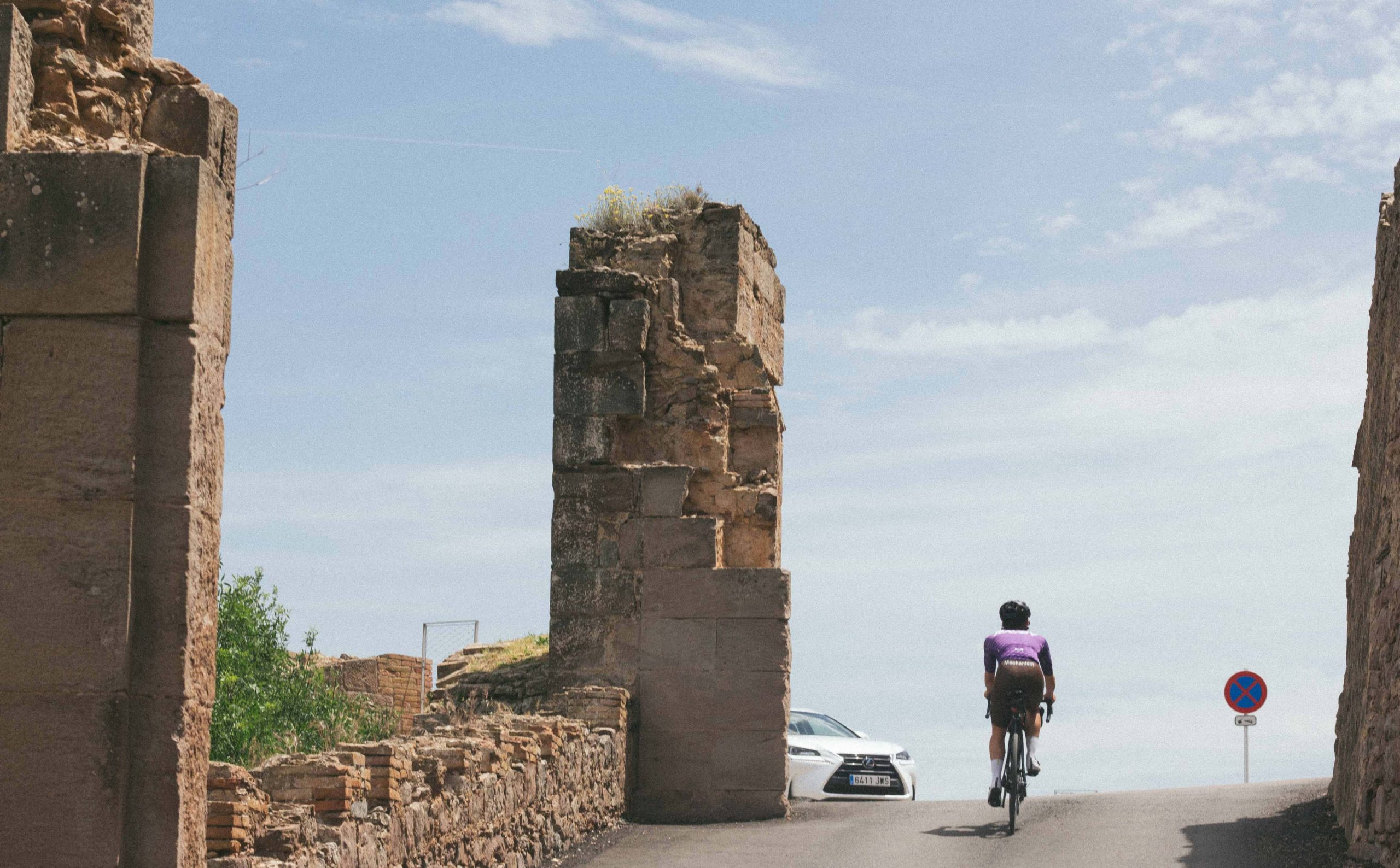 The road out of Solsona provided wide views back up into the mountains we’d called home for two days. But having dropped from altitude, the sky seemed bigger, lending an equally dramatic feel to proceedings. Village to village we went as we made our way to Cardona, the former seat of the Dukes of Cardona, the most important family in the old Crown of Aragon behind the royal family. Their historic wealth is visible today as the town is home to a formidable castle, which on this Saturday was being outdone by the annual salt festival.

The middle chunk of the ride was yet more faultless asphalt. Rolling, but never really feeling like you’re climbing. To our right, constant views towards the jaw-dropping Montserrat, to our left the Pyrenees looming, straight ahead of the twists and turns of central Catalonia. 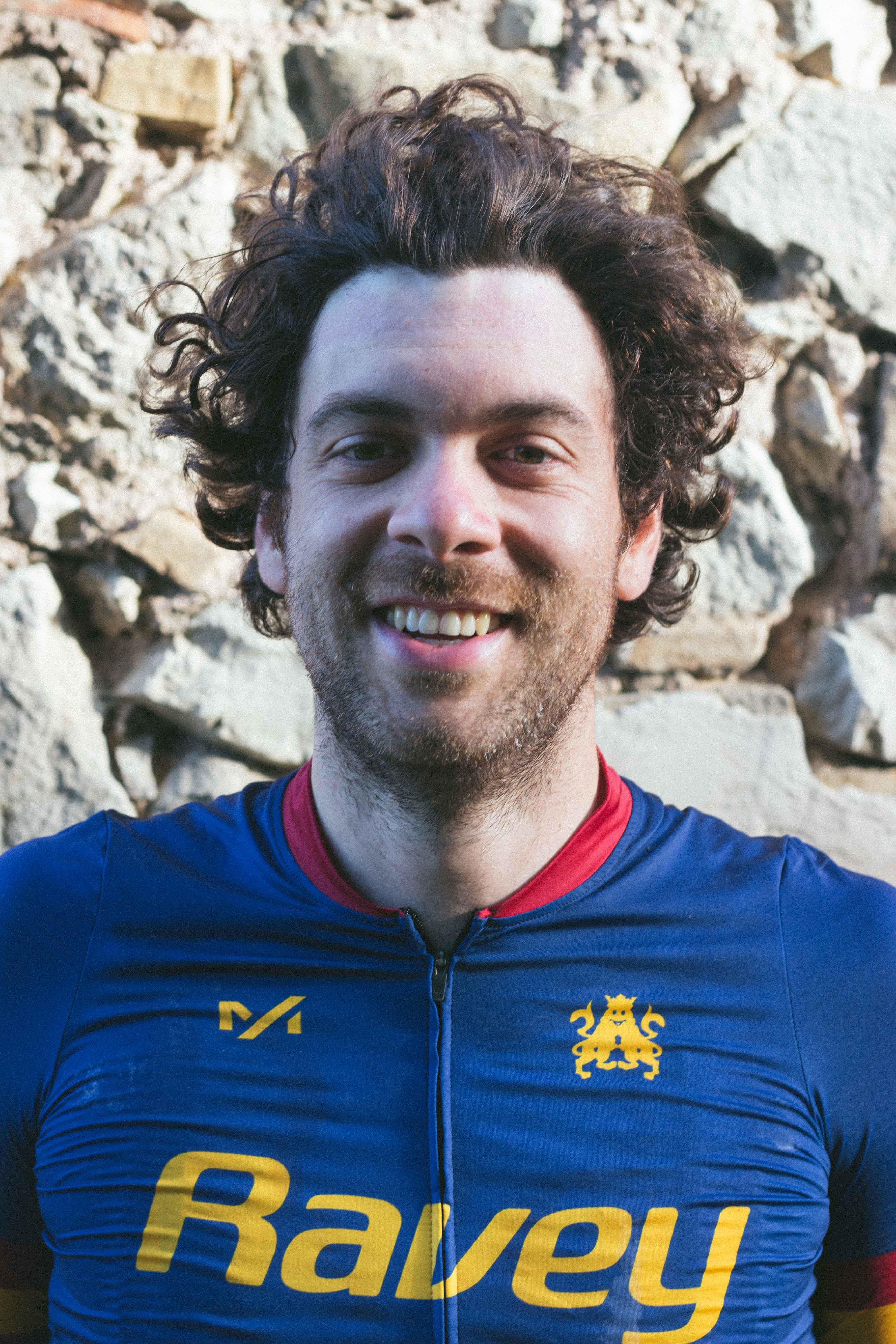 It was all chill until we suddenly had a beep from our computers alerting us to a switchback ahead. A deadbolt 180-degree bend onto a barely paved road, the BV4316. All of a sudden within 5 minutes we were ‘in the middle of the middle of nowhere’, wondering just how it was going to spit us out at our destination for the night in Muntanyola. We were certainly glad to be going down rather than up the majority of this, with near 20% gradients on this tiny path clinging to the side of the hill.

The final part of the day was, naturally, a brutal little 3km effort. For the majority of days two and three, things had felt easy in comparison to day one, but the trip began to bite here. We finally arrived at Can Riera, a rural guesthouse that provided exactly what we needed. It’s a lovely spot, about 12km from Vic run by Aïda and Tom. With space for our bikes, endless space to relax and amazing hospitality we woke up the next morning feeling better prepared than ever to tackle our final day, right back to where we started.

Vic marked a melancholy moment on our trip, the final Bocadillo de Tortilla Francesa. Gui and I took our final bites of these carb-heavy life savers and shared a moment I’ll never forget. Would a sandwich like this ever taste so good again? Is there some sort of science to suggest that these humble sandwiches get better the more kilometres you do? 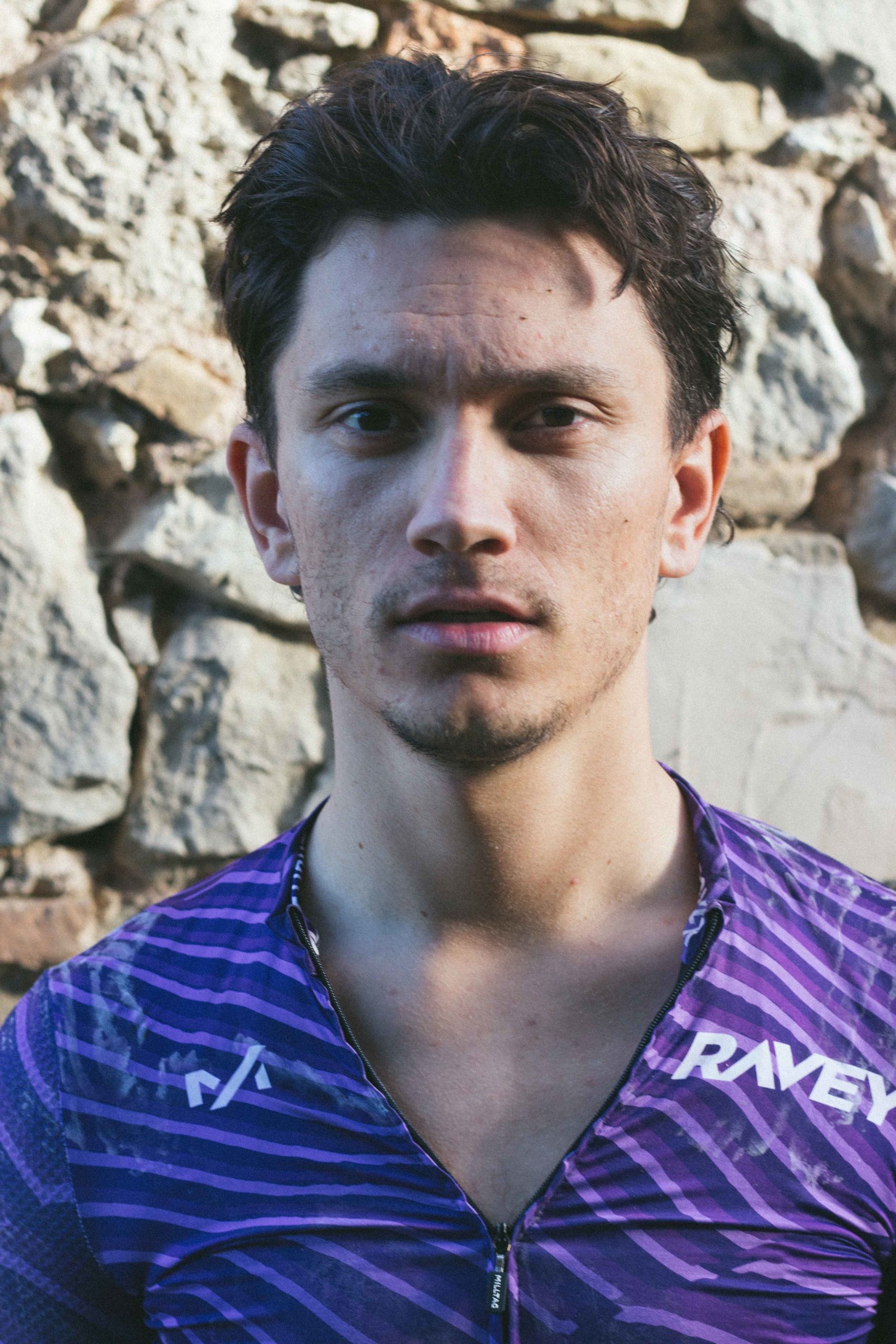 After a final lazy morning gazing at the bottom of coffee cups, we set off for the last chunk of our trip. As we started climbing up into the canyons shielding the Riu Ter I felt like the vibe had changed. For the entirety of the trip, the pace had been a steady, medium-spiced level. Constantly a la pedal but never going too far into the red. Now, however, Gui was ripping it. He looked back and he gave me a look I know all too well. “It’s ‘go home mode’” he said, grinning ear to ear. Never get in the way of Guillerme Cardoso in go home mode. The only time the pace relented was a stop in Rupit for a Cornetto, just enough time to enjoy this gem of a village nestled on the side of the canyon. This ancient, carved expanse feels closer to Arizona than Catalonia, with gigantic walls of rock surrounding you on all sides. In the lake below, the famous village of Sant Romà de Sau, abandoned and sunk beneath a manmade lake, the steeple of the church still visible above the water.

The final leg of rides or trips like these always hits a bit different. Maybe it’s the adrenaline of knowing you’re nearly done, maybe it’s the familiarity of knowing exactly where you are, but you find a second wind, an extra gear, strength in the legs. We did a celebratory sprint over the motorway bridge, as we always do, and set our sites on our finishing line at La Taverna.

Sipping a perfectly cool canya in the late afternoon shade we could put our feet up after 4 days of perfect riding. Maybe it was going to our heads, but we agreed we could probably head straight off and do another 500 (one day later, I’m glad we didn’t). The smooth roads had left us satisfyingly ache-free, the people had welcomed us into their homes, cafes and restaurants. Then there’s the scenery… well.

We could travel to ride anywhere in the world, or we could just find it in Catalonia.

Are you looking for a completely flexible cycling holiday designed around you? Whether you’re travelling solo, with your partner, with your ride buddies from home, with your family or even with your work colleagues & clients, Eat Sleep Cycle’s cycling experts would love to help! 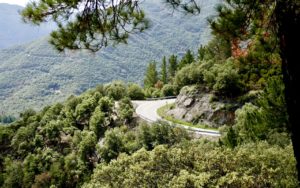 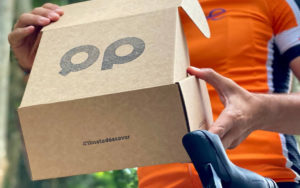 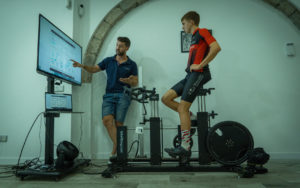